A Framework for Plausible Scenario Planning 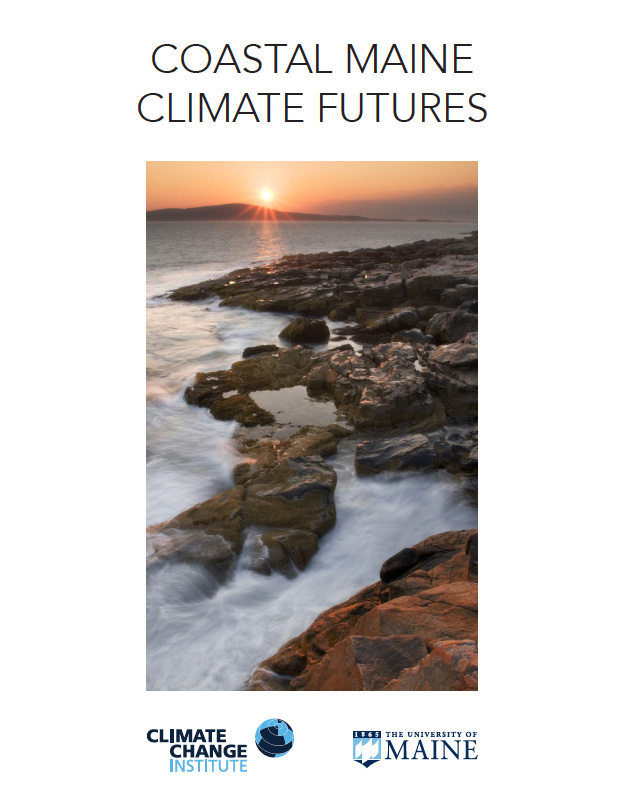 Climate and weather exert a critical influence on the health of Maine’s people, ecosystems and economy. Across coastal communities, where fishing, forestry, tourism, and agriculture serve as the economic backbone, the changing climate poses near and long-term challenges. This report provides a basis for future planning by developing plausible climate scenarios for the next 20 years – the period 2020–2040. The plausible scenarios follow an examination of historical climate trends, climate–commodity connections, and sources of climate variability that affect Maine. This report was produced with generous support from the Russell Grinnell Memorial Trust. 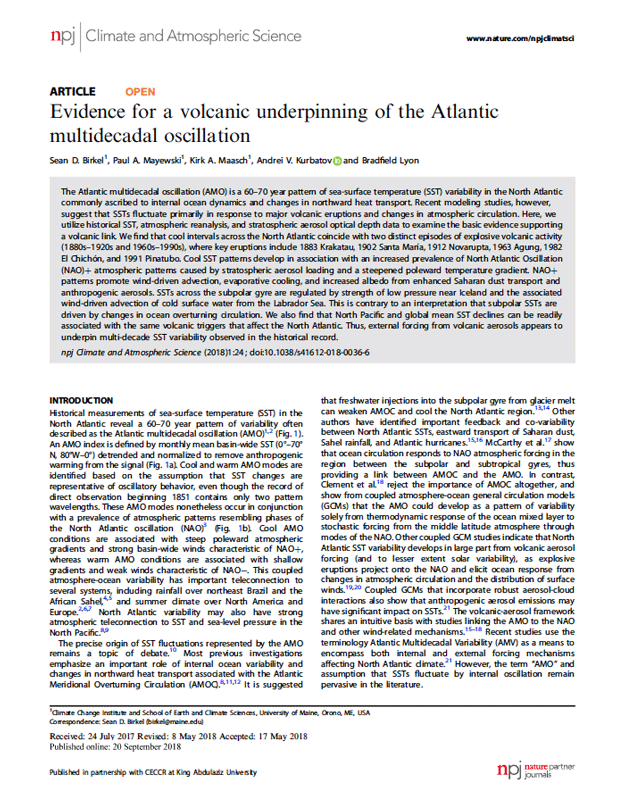 Evidence for a Volcanic Underpinning of the Atlantic Multidecadal Oscillation 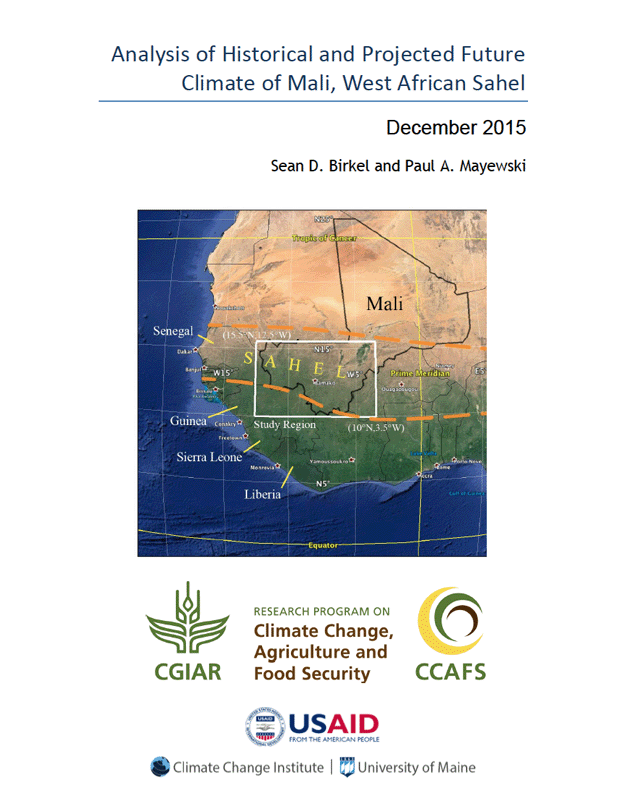 The West African country of Mali experienced devastating drought from the late 1960s to the mid 1980s, followed by partial rainfall recovery that remains below pre-1960s climatology. Here, we examine the historical and projected temperature and rainfall variability across the Malian Sahel in an effort to assist future planning for food security. Particular emphasis is placed on clarifying the teleconnection between sea-surface temperatures (SST) expressed by the Atlantic Multidecadal Oscillation (AMO) and the West African monsoon (WAM). Using gridded observations and reanalysis, we show [...] 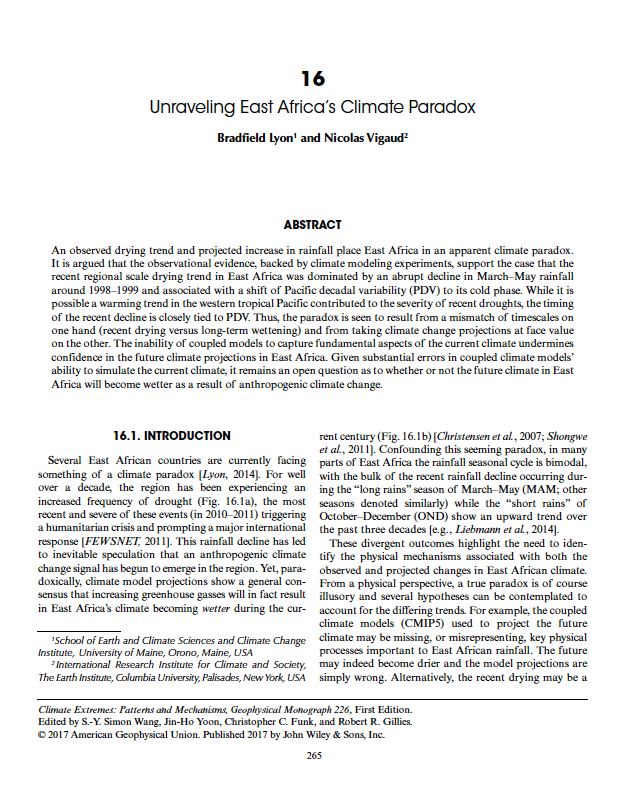 An observed drying trend and projected increase in rainfall place East Africa in an apparent climate paradox. It is argued that the observational evidence, backed by climate modeling experiments, support the case that the recent regional scale drying trend in East Africa was dominated by an abrupt decline in March–May rainfall around 1998–1999 and associated with a shift of Pacific decadal variability (PDV) to its cold phase. While it is possible a warming trend in the western tropical Pacific contributed to the severity of recent droughts, the timing of the recent decline is closely tied to PDV. Thus, the paradox is seen to result from a mismatch of timescales on one hand [...] 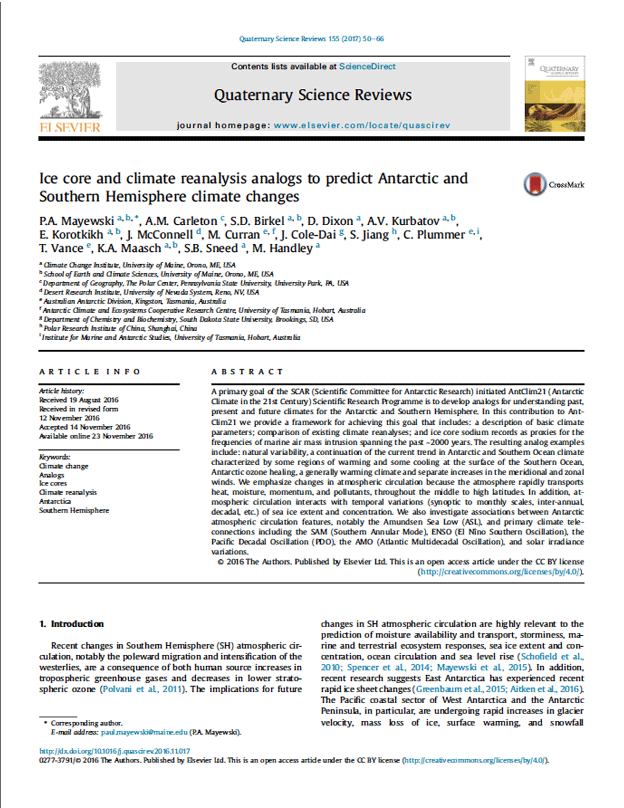 A primary goal of the SCAR (Scientific Committee for Antarctic Research) initiated AntClim21 (Antarctic Climate in the 21st Century) Scientific Research Programme is to develop analogs for understanding past, present and future climates for the Antarctic and Southern Hemisphere. In this contribution to Ant-Clim21 we provide a framework for achieving this goal that includes: a description of basic climate parameters; comparison of existing climate reanalyses; and ice core sodium records as proxies for the frequencies of marine air mass intrusion spanning the past ~2000 years. The resulting analog [...] 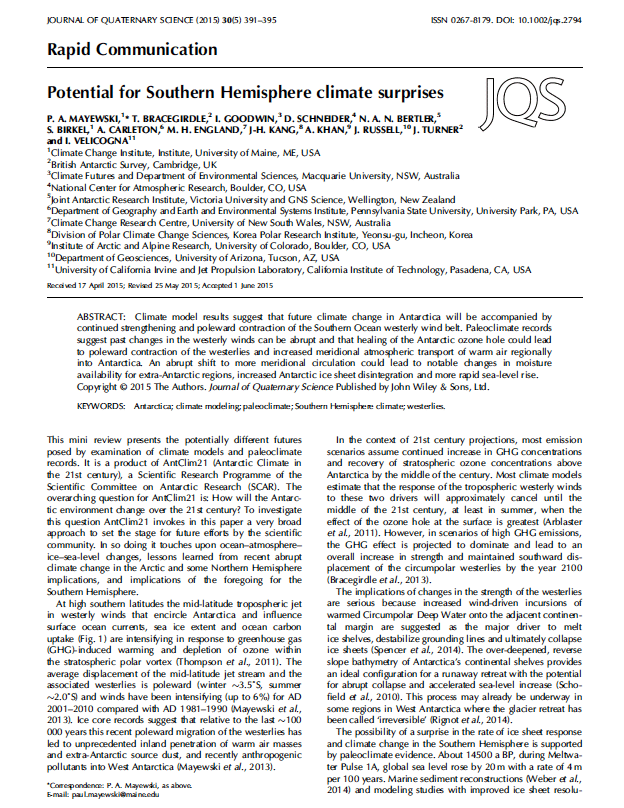 Climate model results suggest that future climate change in Antarctica will be accompanied by continued strengthening and poleward contraction of the Southern Ocean westerly wind belt. Paleoclimate records suggest past changes in the westerly winds can be abrupt and that healing of the Antarctic ozone hole could lead to poleward contraction of the westerlies and increased meridional atmospheric transport of warm air regionally into Antarctica. An abrupt shift to more meridional circulation could lead to notable changes in moisture availability for extra-Antarctic regions, increased Antarctic ice sheet disintegration and more rapid sea-level rise. 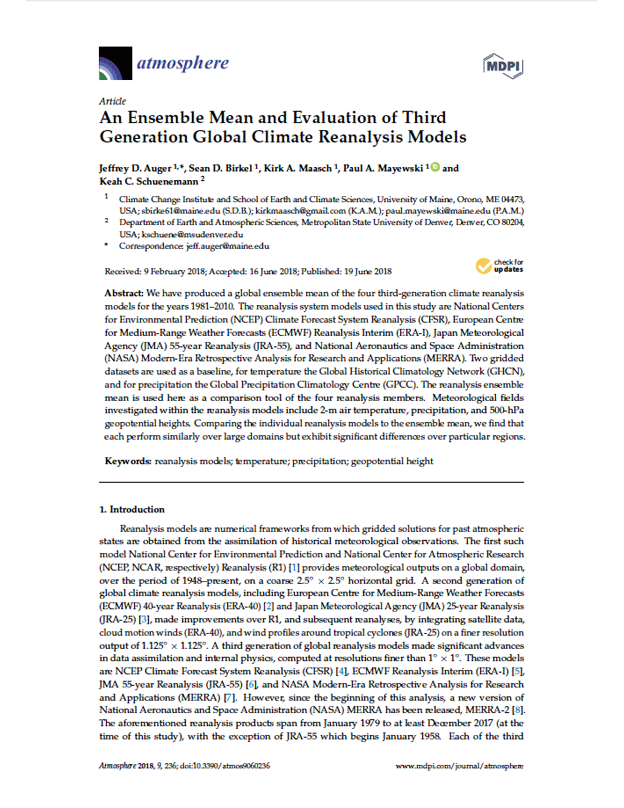 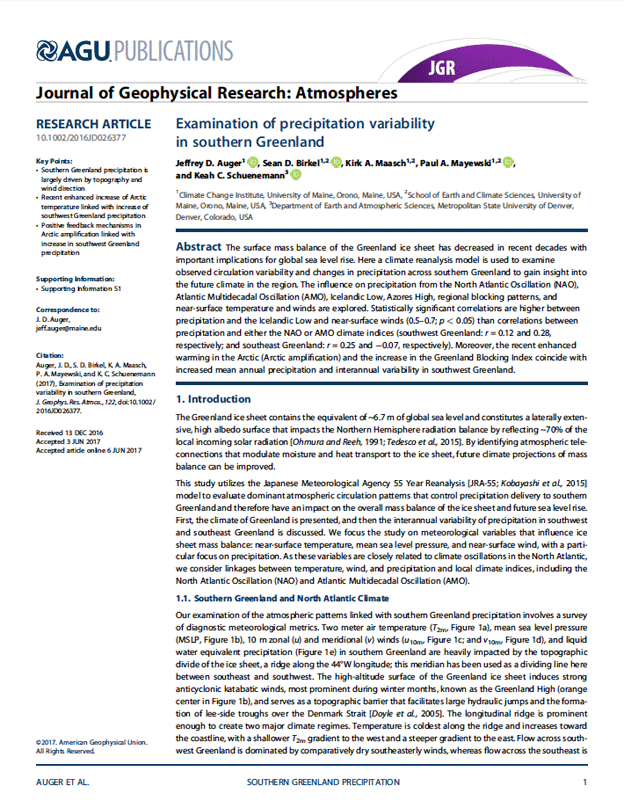 The surface mass balance of the Greenland ice sheet has decreased in recent decades with important implications for global sea level rise. Here a climate reanalysis model is used to examine observed circulation variability and changes in precipitation across southern Greenland to gain insight into the future climate in the region. The influence on precipitation from the North Atlantic Oscillation (NAO), Atlantic Multidecadal Oscillation (AMO), Icelandic Low, Azores High, regional blocking patterns, and near-surface temperature and winds are explored. Statistically significant correlations are higher between precipitation and the Icelandic Low and near-surface winds [...] 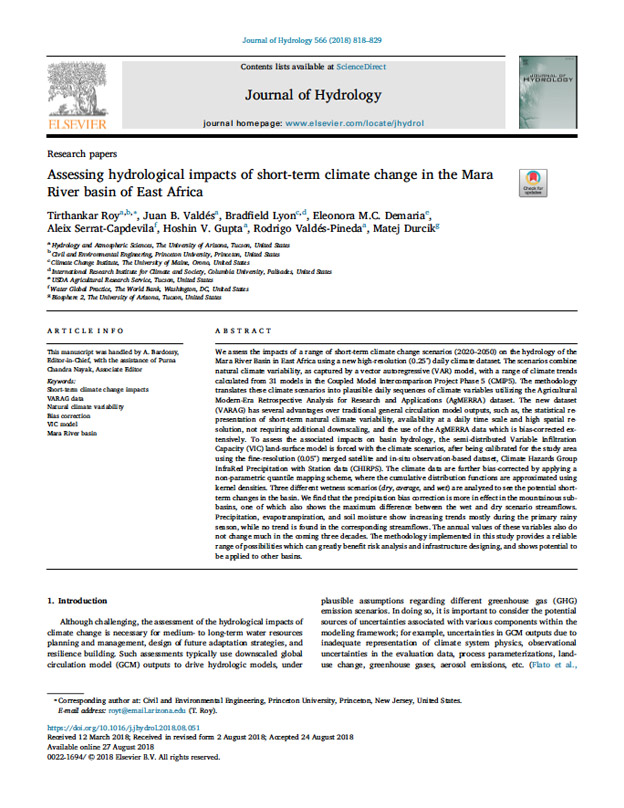 We assess the impacts of a range of short-term climate change scenarios (2020–2050) on the hydrology of the Mara River Basin in East Africa using a new high-resolution (0.25°) daily climate dataset. The scenarios combine natural climate variability, as captured by a vector autoregressive (VAR) model, with a range of climate trends calculated from 31 models in the Coupled Model Intercomparison Project Phase 5 (CMIP5). The methodology translates these climate scenarios into plausible daily sequences of climate variables utilizing the Agricultural Modern-Era Retrospective [...] 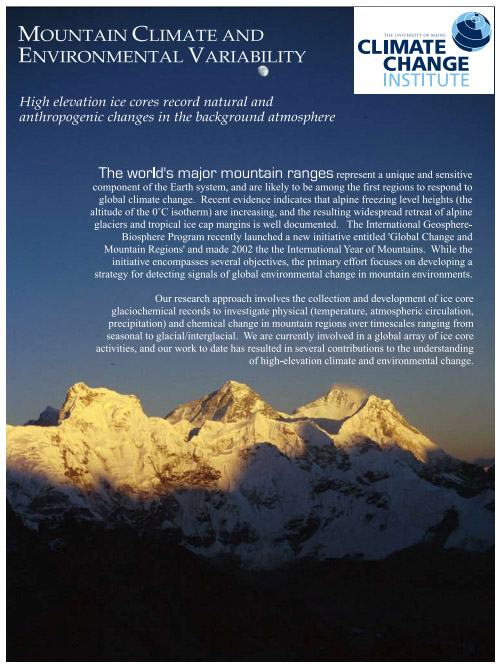