A Framework for Plausible Scenario Planning

Most climate predictions rely on output from computer models, such as those utilized by the Intergovernmental Panel on Climate Change (IPCC). Although predictive models are extremely useful for simulating long-term trends under different scenarios of greenhouse gas (GHG) emissions, they do not necessarily resolve variability mechanisms sufficiently to make reliable local and regional-scale projections, especially over decade time scales. Climate Futures fills this gap by emphasizing plausible scenarios that can be drawn from trends in the location-specific climate record. These scenarios can also consider climate-commodity relationships that may exist.

The steps below provide a roadmap for developing plausible scenarios in the Climate Futures framework. But first, you may want to familiarize yourself with the data tools on Climate Reanalyzer by visiting the page Explore Climate Change. Also refer to the report Coastal Maine Climate Futures, which can be used as a template to follow.

Temperature is a key climate variable, and most parts of the globe are expected to warm considerably over the next century in response to rising GHG concentrations in the atmosphere. Thus, as part of an initial assessment, it is useful to consider the range of future temperature outcomes projected by global climate models (see below). These models are useful for broad-brush estimates of what is physically possible over the next century, and they can serve as the basis for at least one plausible scenario developed in concert with other scenarios based on trends in the historical record.

Important insights about climate change can be gleaned by taking a close look at historical records of key meteorological variables. Examine timeseries of temperature and precipitation — annual, seasonal, and monthly — for the location of interest. Also consider changes in the seasonal cycle, as environmental systems are particularly sensitive to changes in the duration of the frost and growing seasons. Note long-term trends, decadal variability, and years of extremes. This kind of information provides important context. Perhaps some extreme years in the historical record can be used as analogs in the future. Or perhaps the record shows surprising variability that might be important to consider as a possible outcome over the next 10, 20, or 30 years. 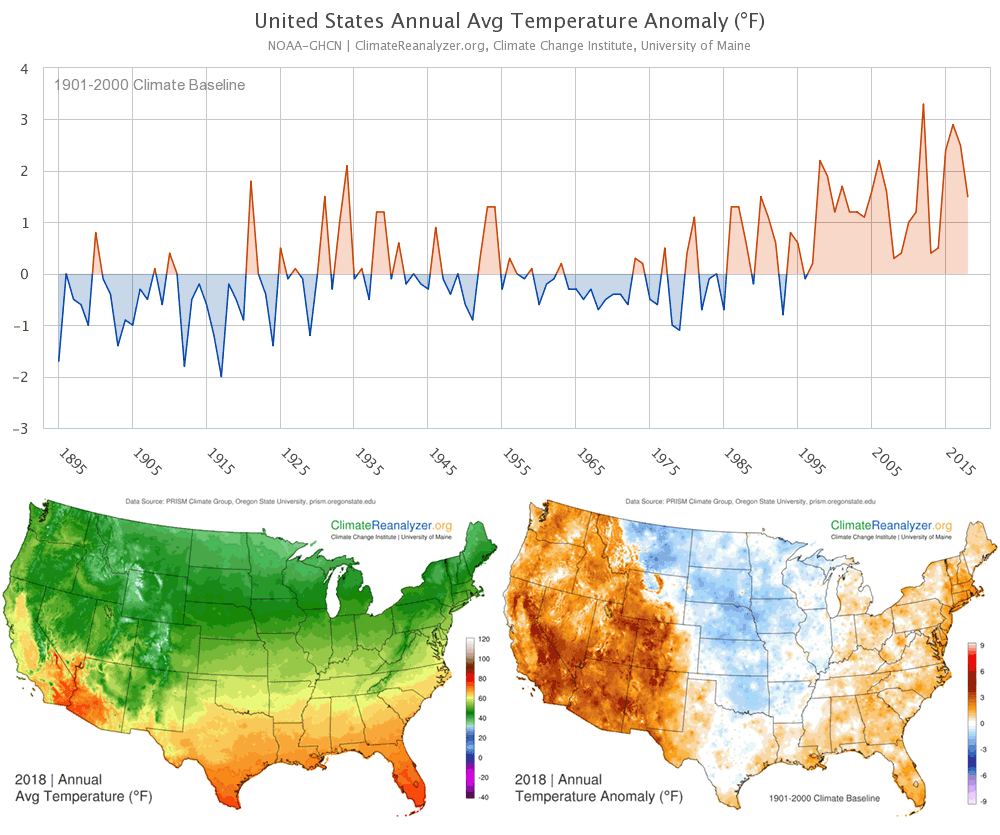 Figure 2. Observed changes in mean annual temperature averaged across the United States for the period 1895-2018. This figure was made by combining images from the Monthly U.S. Timeseries & Maps page on Climate Reanalyzer.

Since at least the 1960s, changes in climate have been dominated by warming associated with increasing concentration of greenhouse gases in the atmosphere from human activity. However, there are sources of natural variability — for example, volcanic eruptions, solar changes, and ocean dynamics — that will continue to influence climate. It is important to consider to what extent these phenomena could impact your region of interest, particularly over timescales of several years.

Perhaps the most prominent source of variability is the El Niño Southern Oscillation (ENSO). ENSO is a recurring change in sea surface temperature (SST) and atmospheric patterns across the tropical Pacific that affects global climate on 2-7 year timescales. There are two ENSO modes that develop with differing intensities: El Niño (warm) and La Niña (cool). The impacts of ENSO vary across the globe — some places see drought, others more rainfall — but the regional signatures of El Niño and La Niña tend to be consistent. Other key patterns of variability operating on a range of timescales include the Pacific Decadal Oscillation (PDO), Atlantic Multidecadal Oscillation (AMO), and North Atlantic Oscillation (NAO).

For a template that assess impacts from large-scale variability, refer to the "Climate Connections" section in Coastal Maine Climate Futures. 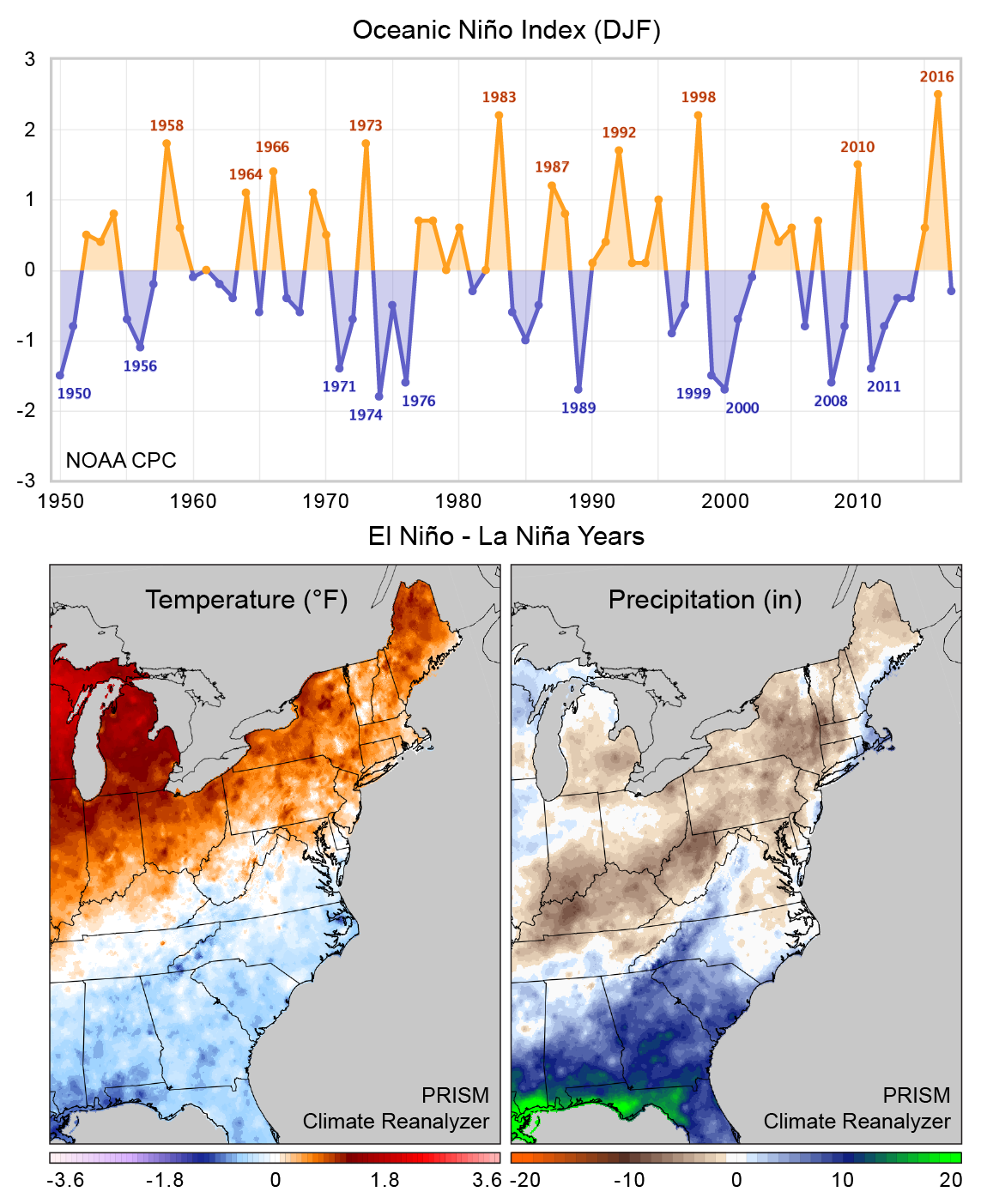 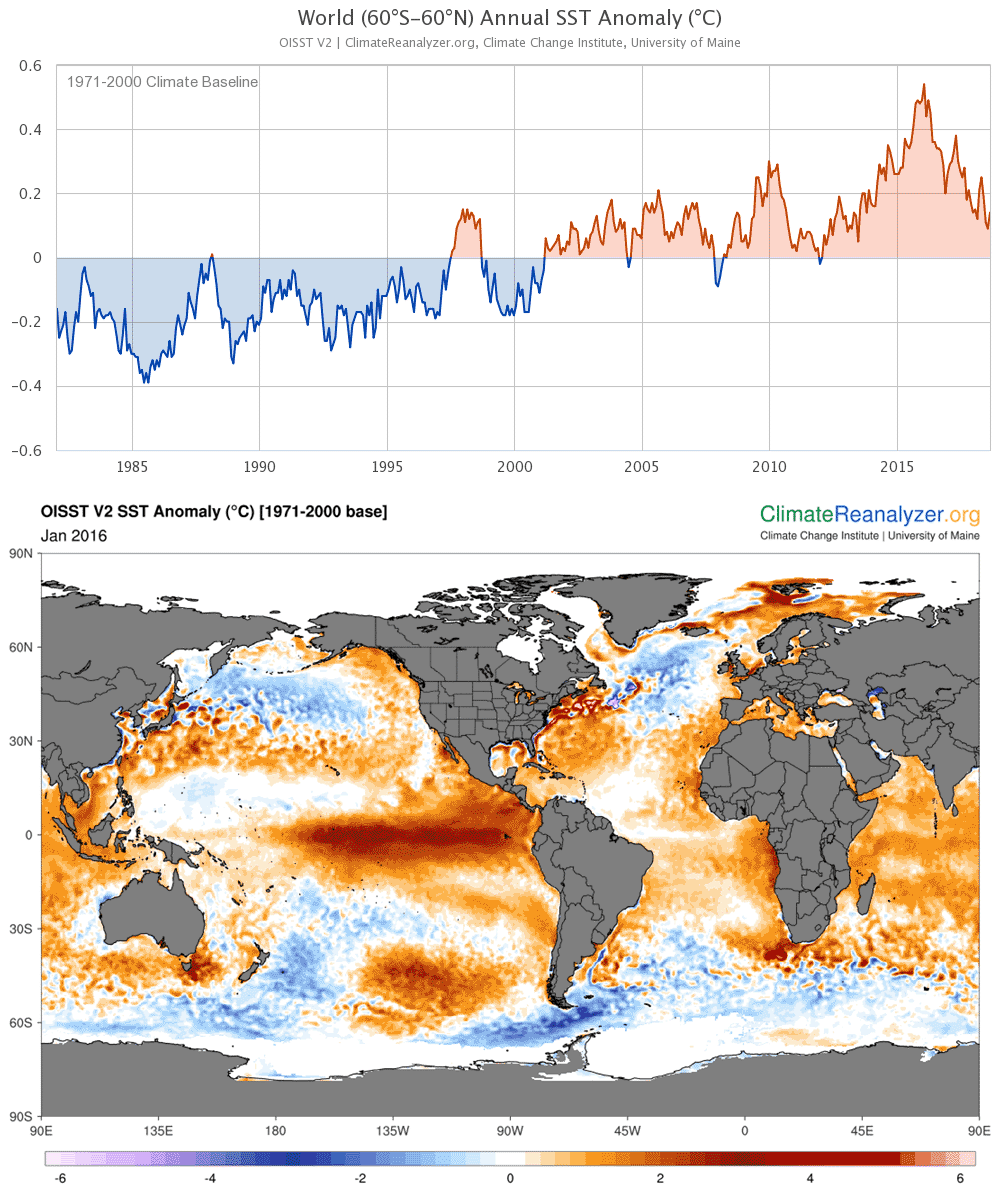 Figure 3. (left panel) Timeseries of the Ocean Niño Index (ONI) combined with maps depicting the temperature and precipitation anomaly patterns associated with ENSO for the eastern U.S. (from Coastal Maine Climate Futures). The anomaly values are calculated as the difference between average conditions for the ten strongest El Niño and La Niña events since 1950. The ONI timeseries data are available from Climate Reanalyzer's Explore Climate Change; the difference maps can be made using the Monthly Reanalysis Maps interface. (right panel) Global monthly SST anomaly timeseries above the January, 2016 SST anomaly map depicting the peak of the most recent major El Niño event. Both images are from the Monthly Global SST Timeseries & Maps page on Climate Reanalyzer.

Commodities, particularly those related to agriculture and fisheries, can be impacted by changes in climate (e.g., as linked to changes in growing season or precipitation), and therefore it is useful to consider climate-commodity connections in developing plausible scenario plans. Linear correlation analysis, which measures the dependence between two random variables, can be performed for commodity and climate timeseries. A resultant linear correlation coefficient of 1 indicates that the measured variables exactly co-vary, whereas a linear correlation coefficient of -1 indicates that the variables co-vary with opposite sign.

Spatial maps of linear correlation between annual commodity and climate data can be made using Climate Reanalyzer. The figure below from Coastal Maine Climate Futures illustrates the positive correlation between Maine annual lobster landings and sea surface temperature (SST). In accord with findings from lobster fisheries research, lobster abundance increases with warming ocean temperatures, at least to some threshold. An important caution is that correlation does not necessarily mean causation — but strong correlations (> 0.5) or anti-correlations (< -0.5) in addition to coherent spatial patterns can lend support to hypothesis, and potentially lead to new insights.

U.S. commodity data can be readily obtained from the federal government for agriculture and fisheries. The respective sources are the USDA National Agriculture Statistics Service and the NOAA Office of Science and Technology. Some commodity data are also available for other countries from the Organisation for Economic Co-operation and Development. 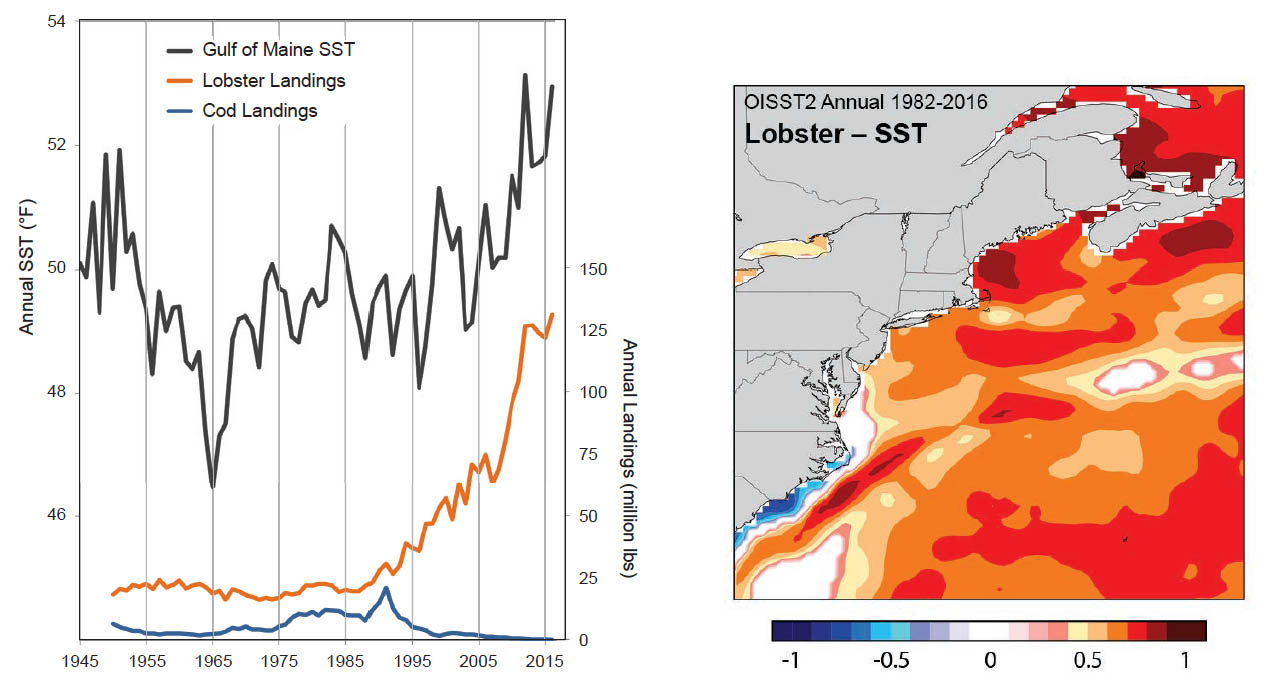 Plausible scenarios of future climate can be constructed once the above analyses are completed. It is important to craft the scenarios to address all perceived areas of impact identified in the initial assessment. Moreover, the scenarios should incorporate climate trends (e.g., summers getting warmer; precipitation decreasing) and commodity relationships (e.g., higher crop yield may increase with warmer summer, but decrease with more dryness) as much as possible. A decision maker may at first be inclined to consider three outcomes or scenarios: low, medium, and high. Therefore, it is beneficial to include at least four scenarios, with the fourth relating to perhaps an unexpected or extreme outcome that otherwise might not be considered.

To again call upon a familiar template, Coastal Maine Climate Futures defines five plausible scenarios in concise paragraphs as titled below. Refer to the report document to see how the paragraphs are organized.